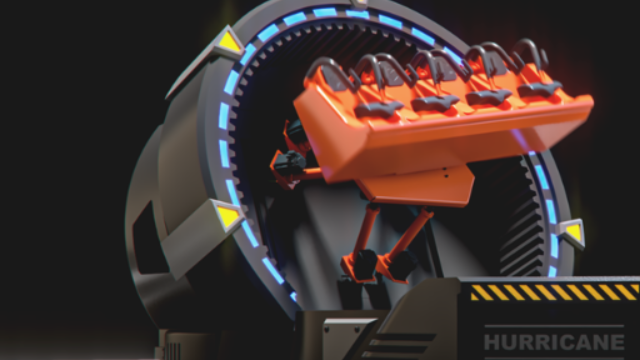 The Evolution of Immersive Ride Technology

Immersive Ride Technology, also known as dark ride, is the technology that creates a realistic environment that looks a lot larger and more realistic than it actually is, with the help of various components such as lighting, atmospheric sound, augmented reality, and ware positioning.

As a simulator rides manufacturer and AR game development company, DOF Robotics has the goal of taking the immersive ride technology to the next step with the help of more experimental and innovative technologies, such as Augmented Reality and Dolby Atmos.

The History Of Immersive Ride Technology

The origin of immersive ride technology goes back to the late 19th century when there were successful attempts to create simple rides that carried people through different artificial landscapes that are also adorned with different atmospheric sounds and music.

Just after a decade or two, there were already tens of themed variations of these rides, most popular of which had been the love-themed and horror-themed rides. They were quite the experience at that time, with impressive light and shadow shows as well as impressive sound effects.

In the following decades, dark rides continued to gain popularity and become more common, in both the US and Europe. Dark rides continued to both technologically and technically be improved, with newer revolutionary approaches such as 360-degree experience, which made the riding them look at not only what’s in front of them, but also on their left, right, and behind, by placing layered decorations around the ride.

There were also other revolutionary approaches such as haptic feedback, triggered sounds, and the use of the UV lights that make some of the surroundings glow in the darkness, creating a more impressive experience.

But the biggest development began in the early 90s and 2000s, with the help of “new media” and other following technological improvements. First, the usage of screens and projections became more popular, offering riders an even more unique experience. Then, newer technologies such as Augmented Reality and 3D projections changed the game completely.

As a simulator rides manufacturer and AR game development company, we mainly focus on breaking the limits of the immersive ride experiences by using Augmented Reality in aspects that nobody has ever tried before. We are able to create environments that look like endless fields only inside a space that is no bigger than a living room. Or we can use bigger spaces to make the riding experience even more unique by creating a whole area in an IP or other imaginary places, and embellishing the environment with even the littlest details

Today, thousands of different patents in the industry are claimed and used worldwide to make immersive ride technology more and more entertaining and unique. Although there are industry giants that own hundreds of patents for dark rides, this usually doesn’t mean that other companies aren’t able to create anything interesting. Most companies that focus on using newer technologies and adopting more experimental approaches such as blending Augmented Reality and Virtual Reality with the help of newer hardware and software have been more impactful in the last few years than the industry giants that usually focus on using more conventional techniques.

As a simulator rides manufacturer and an AR game development company, DOF Robotics focuses on Augmented Reality and similar virtual experiences to offer the riders a matchless and newer aspect by making possible things that can not be made physically with the help of Augmented Reality.

As DOF Robotics, we create unique environments that mainly focus on making the rider the center point of the experience. We use AR, haptic feedback, layered wares, advanced lighting technologies, and surrounding sound technologies to involve the rider as much as possible and provide them with an unforgettable experience.