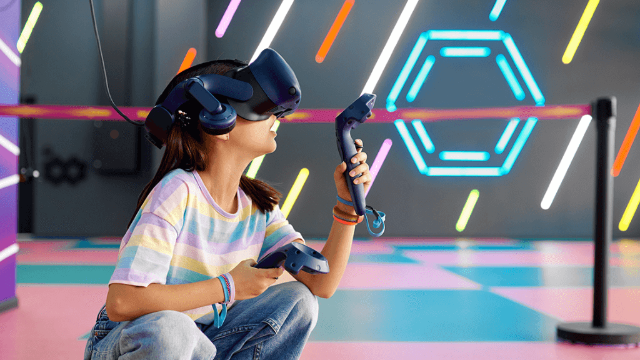 Are VR theme parks the future of entertainment? - A New Dimension of Fun

The history of virtual reality (VR) theme parks can be traced back to the early 1990s when the first VR rides debuted at theme parks around the world. These early rides were experimental and often featured basic graphics and crude hardware. However, they still provided an immersive experience that was unlike anything else at the time.

Since then, VR theme parks have grown in popularity and complexity. Companies like Dreamscape Immersive and The Void have developed more sophisticated VR experiences that transport guests to other worlds. These experiences are often built with high-end motion capture technology and interactive visuals that make the experience even more realistic.

Today, VR theme parks are becoming increasingly popular as a form of entertainment. They offer guests the opportunity to explore virtual worlds and interact with them in ways that would have been impossible in the past. With the increasing availability of VR technology, more companies are creating VR experiences that can be enjoyed in a theme park setting.

VR theme parks have been around for decades, though they were not as prevalent as they are today. Early examples of VR theme parks include the Virtuality arcades of the early 1990s, which featured games like Virtuality Tank, Virtuality Flight, and Virtual Cop. These arcades were located in major shopping centers and were quite popular among the general public.

In the late 2000s and early 2010s, the technology and capabilities of VR theme parks began to expand dramatically. The emergence of motion tracking technology, as well as advancements in virtual reality headsets, allowing for more immersive experiences than ever before. This led to a surge in the popularity of VR theme parks, with many theme parks and entertainment centers now offering these experiences to the public.

The growth of VR theme parks has been accompanied by rising popularity, with many people visiting these attractions each year. This has been driven in part by the increasing affordability of VR headsets, which has allowed more people to experience the technology at home. As technology continues to improve, the possibilities for immersive experiences at VR theme parks are endless.

Discussion of Pros and Cons

VR theme parks offer a unique type of entertainment experience, with immersive virtual reality (VR) experiences that allow visitors to explore different worlds and environments. There are both advantages and disadvantages to these theme parks, which should be considered when evaluating their potential as the future of entertainment.

VR theme parks offer a variety of interactive and immersive experiences that can be enjoyed by people of all ages. The experiences can be tailored to individual preferences and can include a wide range of activities, from roller coaster rides to explorations of different worlds. Additionally, the use of VR technology allows for the creation of new, unique experiences that are not possible in traditional theme parks.

Another advantage of VR theme parks is their potential to provide educational experiences. For example, visitors can explore simulated environments that give them a better understanding of the past and present. This can be especially useful for children, who can gain a more in-depth understanding of history and science through hands-on, interactive experiences.

One of the main drawbacks of VR theme parks is the cost associated with the technology. The cost of admission to some of these parks can be relatively high, and the cost of the hardware and software needed to run the experiences can be even higher. Additionally, there is the cost of maintenance and upkeep, which can be significant if the park has a large number of attractions.

Another potential disadvantage is the safety of VR experiences. There is the potential for accidents to occur if the experience is not designed properly, and there is also the possibility of motion sickness or other discomfort associated with the use of VR headsets. Additionally, there may be a lack of customer service or support if something goes wrong with the experience.